Thought I should write a follow up post to A Guide Shooting While You Are In Vegas and tell you how my shooting when while I was there. 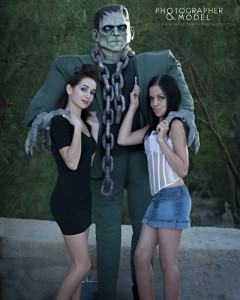 I had a friend and former model, Maren Kate, who needed some images for her online business so I planned on shooting with her and I schedule a shoot with Tiffany Jackson who we interviewed on the podcast last month. My idea originally was to shoot Maren first by herself, then have Tiffany show up and shoot her and add Maren.

I was lucky in that I was working with a Vegas model who knew people, so I asked Tiffany for recommendations and she gave me three. I contacted them and lost one because she was already scheduled. I had one of my MUA’s look at the other MUA’s ports and asked her which one she would pick. She asked what we’d be shooting and then picked one. So I pick her as well.

Notice I’m not saying her name. More on that later.

Once we added the MUA to the mix, we had to schedule makeup earlier and earlier. Originally we were going to start Maren in makeup at 1 PM and have Tiffany show up an hour later. Then I could shoot Maren’s stuff, while Tiffany was in makeup.

Well that wasn’t going to work for the MUA. She had to be somewhere at 4, which I thought was plenty of time. I give my MUAs an hour to do make up. Even doing two girls she should have been done by 3. And she said she didn’t need a hour, but half that.

But she was worried about it and decided she would do Tiffany’s makeup before 1 and show up with Tiffany done and do Maren at 1. Fine, I’m flexible.

Everything was going well, until 10 minutes before I get on a plane in Houston on the day before the shoot. When I get an email from the MUA telling me she isn’t coming. She’ll get Tiffany done and to the shoot by 1, but she has to go into work early, “…this is why I don’t like to schedule on days I have to work.” Nice to tell me this now.

So I get to start my trip off stressed out. I sent a quick email to Tiffany asking for help and got on the plane.

When I got off the plane – at 10 PM Vegas time – I had an encouraging email from Tiffany telling me she was sure I’d be able to work it out.

I sent a MM message to the other MUA – CKO – and hoped for the best.

Then I went and had a drink.

But CKO came through for me and wrote me back and agreed to come the next day. 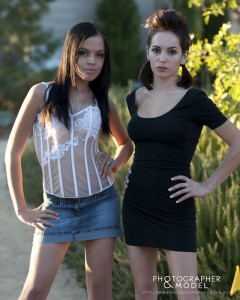 OK that was all the drama of the trip. Next day CKO and Maren were at my hotel – The Wynn – and we shot a lot of stuff in the room. Tiffany showed up as well and we shot there in the room for awhile.

A cool thing about the Wynn was it has windows that show the Strip, so there are some images with the Strip in the background. I’ll be posting some over the next few days.

Cool, or uncool thing about those same windows – which are floor to ceiling on one whole wall – is they are tented gold. Yep. Gold. In a way it is like golden hour all the time. But not quite. I did use a SpyderCube to get a white point but everything is still pretty warm.

After shooting in the room, I wanted to shoot in the desert and by the Las Vegas sign. The models suggested the Desert Springs Reserve, which is desert like and has other desert green stuff.

So we all load into Maren’s car and first go to the Las Vegas sign. They’ve actually built a parking lot in the median and a little place for people to shoot. I would have designed it differently. It is very hard to get both the sign and the people in it.

I had an idea for the two girls to be pulling on and fighting over something in front of the sign. In the end it didn’t work.

Then we went to the Desert Springs Reserve. It was getting close to golden hour and the place was almost closed. But we got some good stuff there. They had had a contest for school kids to build “scarecrows” out of garbage and they were displaying them all over the place. There was some impressive stuff, but I didn’t want any of it in my images, which limited where and how we could shoot.

I’ll be posting actual images from the shoot with commentary over the next few days, so I’m not going to go into detail of the shoots right now. But it was fun. I got to do it all in one day and had the rest of the weekend to relax and enjoy Vegas. And stay up too late every night. And eat well. I like Vegas.