There just aren’t many good holidays in March.

Ankha’s boyfriend at the time was Brian Crump, who was a body painter. We decided to do something theatrical. We had masks. We got this.

The three masked people? Marc Moorash, my wife Suanna, and Model Spleen, who was also part of Seraphemera back them.

Of course February is dominated by Valentines Day. Which makes us think Cupid.

Makeup was done by Tara Ward.

We started with the idea of baby – or in this case babe – new year taking over from the old year/father time. Babe was a great idea because we could strip her down a bikini. But we had to put a twist on it of course.

The model is Skarah Black.

Some points to consider, just to make it interesting. I was just discovering the joy of oiling up model to make them glisten, so we did it Skarah. Didn’t really show up in this image, but it did make her slippery. Which isn’t that great when she’s holding a Bowie knife and kneeling over father time.

Father time is Marc Moorash of Seraphemera Books. Seraphemera was my partner on this and they did a lot of work, including all of the layout of the calendar.

Here’s a couple more. Skarah has a very long tongue, that’s all I’m going to say. The Absinthe picture appeared under the January calendar. Apparently absinthe is very goth.

I mentioned last week when talking about creating interesting work that I had done a Goth Swimsuit calendar. It was shot during the summer of 2006 and was for the year 2007. Since then the website for that calendar has gone away and there really isn’t anywhere you can see the images. So I decided to post all of the images from the calendar here on Glamour Apprentice and give you some of the background behind each one.

First we start with the cover. 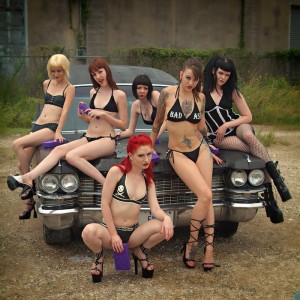 The cover was not shot first. It was almost last. For the calendar a few models come in from out of town. There were two that were considered “headliners” for the calendar, Angela Ryan, the redhead, and Athena Fatale, the bad ass. The weekend they were going to be in town I contacted the guy who provided January’s hearse and he brought a buddy with another hearse for a “hearse car wash”. The carwash being a staple of swimsuit calendars and hearse’s being a staple of goth. Then I contacted a number of the local models to come down and shot them with the hearses. Getting the cover.