Thursday I had a comercial shoot during the day at the studio and needed to be somewhere downtown in the evening so I decided I’d just hang out at the studio while one of my partners shot. Bob Warren was shooting traveling model Hollis Ireland that evening and invited me to come along. He planned to go to a number of places around the studio and shoot just using natural light. Hollis is super hot redhead so it didn’t take much arm twisting to get me to come along.

The sun was fast dropping and the Texas wild fires where doing interesting things to the golden hour light. When we got to our last location the sun was almost down. We were shooting under an overpass, using the tungsten lights as our light source. I asked Bob what he was doing for white balance and he said he was using tungsten, but that the natural light would have an interesting blue cast. Ok, whatever. I switched over.

Then I was blown away by what happen. 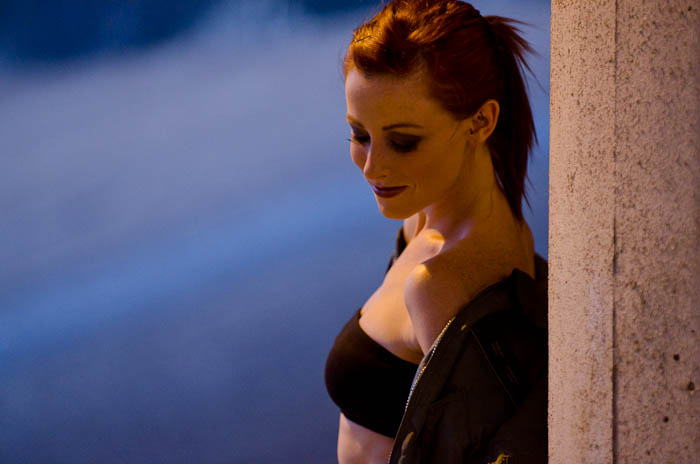 Where the overhead lights hit the model she was a warm gold color like you’d expect from tungsten – though I’m not sure why changing my WB didn’t make that white. But where the natural light hit anything, it turned a rich blue color.

As the sun went down, the blue got darker as you’d expect. (The less exposed/more underexposed something is, the darker the color.) 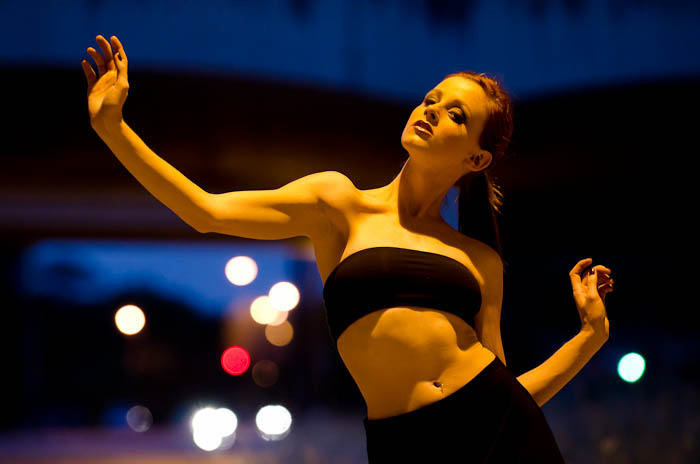 This is my favorite image from the shoot and shows the dramatic difference in color temperatures. There was no color work in post production at all.

The only negative to these images was my ISO was cranked up to 1000 and the images where still underexposed giving me a lot of noise. I used Lightroom’s noise correction to fix some of it, but now I feel the skin is too smooth.

Next time you are out shooting at sun down, look for some tungsten light and try this out for yourself.

PS: Don’t worry Shawna and I are planning our return to podcasting, and there will be an expansion of what we’re doing here at P&M to build up the community.

There are lots of things I forgot to bring to the shoot, despite having a new camera bag.

One was a polarizing filter, which would have gotten rid of the reflections in the window. But here are a couple of Tiffany with the strip behind her.

Roxy has some images from our last shoot together that include me on her blog. I’m sure you want to see me, not Roxy. 🙂

Sorry I haven’t posted in a while. I’ve got a backlog of images to retouch, but I’ve been busy with other things.

On the 16th I’m shooting a concert here in Houston and I wondered if any of my photography friends had any tips on making the most of it.

I actually shot Voltaire at a club her in Houston a year or so ago, so I have some experience, but I’m always willing to learn.

…we do have a wedding dress at the studio. And I’ve got one at home I bought at a second hand store and the only time I’ve used it was to do a trash the dress shoots with a model. That was fun.

Shot with the lovely Stacey Spring, Kimberly Boenker doing makeup. We were doing some fashion stuff an we pulled out this dress.

The images for this week are from a shoot a did a few years ago with Lauren Elizabeth G She did her own makeup and I liked it alot for some and not so much for some. Really I just didn’t like the eyes in this headshot.

Lauren, had in my opinion a very flexible look, which I think you will see over the coming days.

Here’s a headshot to start

I try to always have an informative article posted on Mondays to the blog, but this weekend I was just too busy. I had two shoots, and I wasn’t done with retouching on the two before that. So I didn’t get an article written.

But to show it was worth it, I’m doing something I rarely do and letting you see some unretouched images. Only on the blog, and they will probably disappear will the retouched ones are available.

These are the last three models I shot with. First from weekend before this one, the wonderful and talented Kimberly Boenker doing pinup.

Then we have Ashley Warnken in the green top and the belly dancer body shot and lastly Cherise.

Straight out of the camera. And I think they are worth waiting on an article for and waiting for the retouches of the shoots. Don’t you?

Bella brought this outfit and she brought it again to the pinup workshop where she was one of the models. Its worth shooting more than once.

The magic prop room also produced the suitcase. And yes, we have shot models in the suitcase, its that big.

What era is this? The time when stewardesses wore hot pants.

Alas Victoria Secrets wasn’t doing uniforms even then, but this one would make flying fun again for me. Getting through security would be fast as well.

Now that you can see the wall alot more, let me explain the background lighting. There are two gridded light behind her. One left and gelled blue and one right and gelled red. The grids keep them from overlapping too much and you get a two tone color.

An important thing in pinup is to watch the details. Well another of my partners did product photography for a “dancewear” – and we ain’t talking ballet – company. That’s where the purple pants come from. While free love was all the rage, I’m not sure see through pants were.

I don’t think her panties are era either. But while no panties might be hippie, I think there would be another fashion that Bella is more modern in to mess up the detail.