This is a recount of the best and worst trip I’ve made to Vegas. This is the only time I tried to shoot while there, and that ended up being cool and horrible.

The worst consequence of a model flake ever, and the only time I ever stood a model up.

Things to learn from this. You can’t party till 4 am and shoot the next day. 2 am maybe. 🙂

I did have a great shoot with Crystal though. I need to contact her again. I thought I followed her on Facebook but had the name wrong. What a doof.

Of course everyone wants to know how the trip was. It was a roller coaster. Here’s a day by day break down.

Slept until 1 on Friday. I had a shoot at 6. Went a played a little poker and one some. Then it took longer than expected to get the car back from the Valet – like 30 minutes – so I was already running late. And the model was at the location early – an hour early. So we get on the highway and are driving, and get caught in traffic. I mention to my co-pilot that we’re heading South and he says the sun is on the wrong side of the car for south. We’ve been driving the wrong way for 30 minutes. Call the model back and she says I won’t make it back before the sun goes away. So I flaked on the model.

We go have dinner and then decided go to the nightclub Tryst in the Wynn. We get there at 11 and there is a big line. But they don’t let guys in by themselves. We wait and wait. At midnight I realize I’ve got a shoot at 10 AM the next morning and am not going to be able to stay out till 4 again. So I leave right before the others get in. My roommate comes in at 6 AM.

Saturday morning I feel like death warmed over. I’m nauseous, groggy and everything else at 8:30 when I get up. But the valet is fast and I find my shoot location with half an hour to spare. (Gave myself extra time to make sure I made it.) Meet Crystal and we have a great shoot.

That afternoon I play a little more poker and am down. Middle of the afternoon I get a call from one of the two models I’m suppose to shoot with and she can’t come. I try to call the other to arrange another meeting place, but she doesn’t answer. Which is a bad sign. We drive out to the casino we are suppose to meet at. I try to call her two more times. I get in the parking lot and starting driving around looking for her. Don’t see anyone. Decided to leave one parking lot and go to another. Get the the stop sign, there is a line of traffic in front of me stopped. A big truck stops for me. I pull out to turn left and get T-boned by and SUV.

So I spend the next 2 hours filling out accident reports. The model never showed either. Then I go turn in the car and don’t want another one. (Yes the rental agency would have given me another).

My model Crystal arranged for us to get into Jet at the Mirage that night. I was feel like extra crap after the wreck, but I wasn’t sure my buddies could get in without me. So I hung with them till we got in – and paid a $30 cover. Then I went back to the room and to bed.

We had to check out of the hotel at 11 AM on Sunday. So we were up at 10. Checked out, hassled the other guys who weren’t up because they’d asked for more time from the hotel. Then we ate some lunch and went to play poker. Played for about 5 hours. At one point I was up $400. If I could have made another $50 I could have paid for the trip. But I ended up only up about $148 bucks, but that was cool.

Here are a couple picture of the car after the wreck. 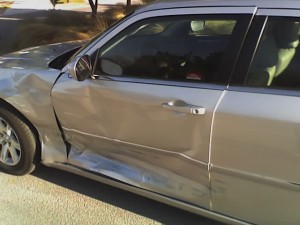 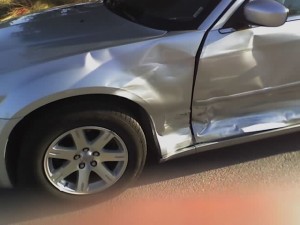