Sometimes one shoot isn’t enough to really get what you wanted. You come up with a cool idea and then do it, but you know it could be better, or you could do something a little different.

The obvious solution is to shoot it again. In one sense that seems like you are shooting the same thing over and over, but every shoot is a little different. You may change the lights a little, or shoot from a different angle. You might use a different model and hence get different personality and physicality. 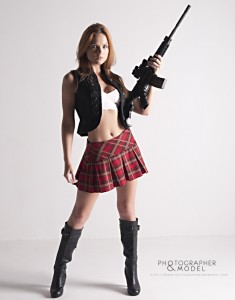 I’m a firearm enthusiast and like beautiful women with guns. So I’ve often shot models with firearms. Been doing it for awhile now and there is a infinite variety of things you can do with that theme.

If I get a new gun, or access to a new gun, I’ve got a new thing to shoot.

Every model is different, some know firearms, some have never held a gun. Every one gets a lecture in firearm safety and training in how to to hold the gun. Some remember to keep their finger off the trigger, others don’t.

I had this idea about shooting models under a shower. I shot some in the studio’s actual shower, but I wanted something more artistic than that. My partners figured out how to set up a shower at the top of our car ramp. Then I got to figure out how to light it.

My style includes a lot of shadow and dark backgrounds, so I lit it so only the model had light to start with and then added lights to bring out the water spray. Recently I’ve added color to the background/water light.

I’ve also shot the theme in jeans, a bikini, nude and in a dress. It is an on going project – one models are approaching me to shoot. 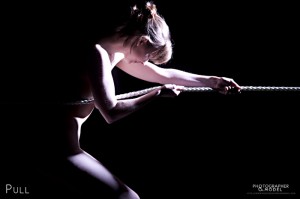 My newest theme is called Pull – the first one to have a name. It is a fine art series where I have a model pull on a rope. I think there is a lot of possibility and look forward to exploring it.

Since the lighting is almost exactly the same, I’m getting most of my variation via the models themselves. Don’t really know where it is going to go yet, but it is fun to explore.

Since Pull is so model centric I actually wrote a Pull Shoot Specification for it. It is hard to explain simply but in depth.

And of course you can then cross the themes. Like the image of Shawna holding my rifle under the shower from last Friday. I’m also thinking of doing pull under the shower.

Have you ever done a theme? What was it and how’d it work for you?

3 thoughts on “Exploring a Theme”