The Rule of Thirds is a classic rule for composition. In the shortest form, it says you should place things in your frame where they intersect the lines dividing the frame into thirds. Using this kind of goes back to getting your subject out of the center of the frame. The rule of thirds gives us a guide to where to put them.

You should put your vertical subjects along the line between the center third and the side third. Doesn’t matter if it is on the left or the right side. It should be on the “third” line.

If your model fills the frame, then put her eyes on this third line. If you can put them on both the vertical and horizontal third line.

For example in this image of Amanda her face is right on that line. Yes, there is a lot of empty space in the image, but your eye goes right to her. The image is dramatic and it has an artistic feel to it. 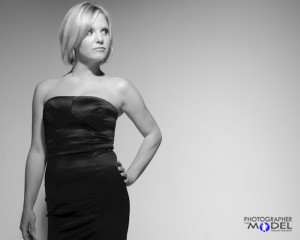 Once again we can use the nine square grid on our camera to find this point. You don’t have to be super strict about getting it right on the cross point, but pay attention and use it well.

Yesterday I mentioned putting the subject in the center of the image was bad and one of the most common mistakes I see in new shooters. Another common mistake I see is not getting close enough to the subject. There are two ways this is wrong, one I think of as a mistake and the other a matter of style.

When Being To Far Away is a Mistake

The mistake is to leave a ton of empty space all around your subject. You see this all of the time with amateurs on their point and shoots. You look at the image and there is a tiny little person in the center bottom of the picture and all kinds of sky or background stuff in the rest of the frame.

Why do they do this? I think it is because our brains see too well. They are focused mentally on the subject and think they are bigger than they really are. In their mind all they see is the subject and not what’s around them. They maybe worried about other things, like making sure they get all of the subject in the frame, or showing some background for context. But their brains blow up how much of the subject is there.

That’s a mistake, one you can correct by thinking about the edge of the frame. The easiest way to do this is to consciously run your eye around the edge of the frame in your viewfinder. See what is actually there. If while doing this you aren’t seeing much of your model, you may be too far from them.

This also helps with chopping parts off. If you see part of your model – an arm or leg – leaving the frame you get a chance to consciously think if that is a good thing or not.

After you do this for a few images in a couple of shoots it will become unconscious. Once you realize it is a problem, it often stops being one, because as Shawn likes to say, “Knowing is half the battle.”

The Matter of Style

One of the criticism I get of some of my head shots is they cut off part of the subject’s head. Like this one of Janet. 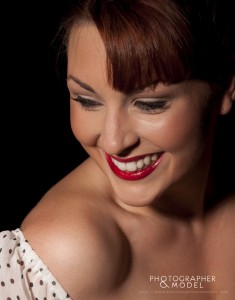 OMG! I cut off her head on the right side of the frame! That’s against the rules.

Screw the rules I’m an artist.

Kidding aside, it is a stylistic choice and I think that part of her head isn’t as important as the shoulder and smile in this image. If you look back through the images on the blog you’ll find I do this alot.

Getting close adds intensity to the image. Think about physically being closer to another person. Isn’t it more intense to have your eyes inches from the face of a beautiful woman? Well that’s how our brains interpret photographs as well. The closer the more intense.

One of my favorite images from this year is the one at the top of the post. It is close, really close. And I cut off part of her head, but it makes you feel like you are coming over her shoulder and she’s just turning to meet you.

You know what the most common problem I see in new shooters? They put the subject dead center in the frame.

Don’t do this. There is a no drama. The image is boring. There is no visual flow.

Let’s consider two different crops of the same image. First is Virginia’s rear end centered in the frame.
It’s an interesting shot. Virginia has a fine derrière. The lighting is dramatic from one side and creates a great curve. If that is all you saw, you’d think the image was OK.

Now lets try it how I shot it, with her in the left third of the image. Then I cropped into a film like aspect ratio to exaggerate the composition.


Suddenly the lines have a longer path and increase the movement of the eye. This in turn ups the overall drama of the shot and emphasizes the model, even though they aren’t in the center of the frame.

Here’s an exercise to try next time you are shooting. Most cameras have a grid in the view finder with 9 squares. Try and keep all or most of your model out of the center square. Just push them to one side or the other.

If you are close, you might just try and keep their head or eyes out of the center. See if that makes a difference in how the image feels.

Better yet, shoot it both ways and post the two images to the forum for others to see.